■ The new app game of the highest peak of fighting animation “Baki series” is finally here! !!

A super popular fighting manga serialized in Weekly Shonen Champion! A battle RPG featuring the strongest warriors from the mega-hit titles that boast a cumulative total of 85 million copies in the series!

■ Aim for the strongest on this planet with the strongest warriors! !!
Many fascinating characters such as the underground arena warrior, the deadliest prisoner, and the sea king have appeared! Decide on the strongest guy in human history!

■ Raise an original warrior and hit each other with other players! !!
Accumulate the mystery gauge in a simple semi-automatic battle! Polish your Han in various battles between players such as 10 to 10 real-time battles!

■ Story mode where you can enjoy the story of the Baki series! !!
Let’s chase the famous scenes familiar from TV animation such as the death battle with the deadliest prisoner with the voices of super gorgeous voice actors! 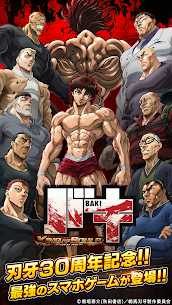